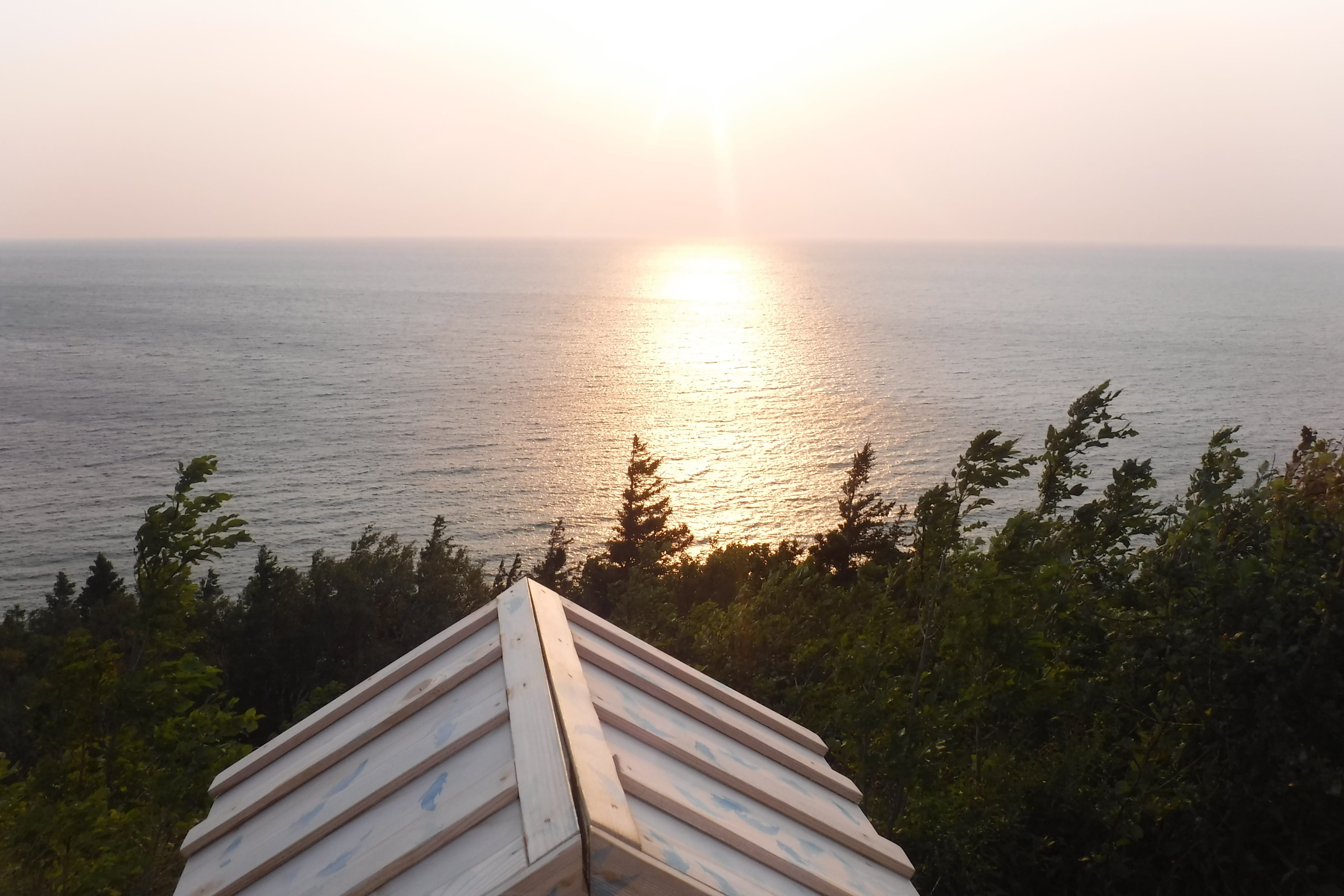 Personally, I think the best time to tour the Cabot Trail is once the leaves turn color, but recently we took the opportunity to introduce some friends from Holland to it’s beauty.

We were only joining them for part of the trip,so we picked up the RV they had booked at CanaDream in Waverly, and headed out.

We only made it to Port Hood-and only stopped there because it was the closest thing we could find for a camping spot. We drove into Sunset Sands RV Park at around 8pm.No one was around to help us so we helped ourselves to a site. A telephone number posted on the door led to a voicemail. It was easy to see the park catered to mostly seasonal people, but I was disappointed at the work involved in trying to connect with someone-anyone- so we could sort out payment and such.

It was waterfront and windy-but it’s Cape Breton after all.

We made Cheticamp early afternoon-the plan was to take our time and really enjoy the trail. Cheticamp is a small but picturesque Acadian village, making its living primarily by fishing. In season, tourism is a huge part of Cheticamp, with numerous craft shops and several whale watching outfits. By the way,  Minke and pilot whales are the most common in Cape Breton-for a better opportunity to see mighty Humpbacks and others-head to the Bay of Fundy.

Cheticamp was only a hop,skip and jump to Cape  Breton Highlands National Park. It was busy. Even though it was a weekday and after Labour Day, there were only 4 unserviced sites left.

Once we got settled, we headed out to the somewhat infamous Skyline Trail, less than a 20 minute drive. As we got closer to French Mountain,we could see these teeny ant-like figures waaaayyy atop a rock outcropping-yup, that was Skyline.

We chose the out-and-back route as opposed to one that loops around which would have added another 1 and 3/4 kms to our 7.5 k  trek. It’s a good often used trail, cutting through evergreens and few hardwood.Nothing spectacular along the trail. But,as the gal at the visitor centre said-the payoff is at the end. It’s gorgeous.

I was so hoping to see some wildlife-especially after we’d passed a fellow hiker who warned us about a pair of moose ahead. Alas. No. No doubt they were hidden in plain site, as moose often do.

But the view at the end made up for missing the moose. Mostly.

Our destination for Day 2 was Ingonish, just over 80 kms from French Mountain. Once again, we were treated to spectacular views and terrifying (to me) downhill 180 degree switchbacks. I was most underwhelmed as I was driving . Luckily the day was clear and gorgeous.

The campgrounds were not as plentiful as I would have thought. We bypassed Broad Cove thinking there would be one in Ingonish…full. In the end we spent the night in a tiny RV park near Ingonish    .
It was September, but beach weather, so what could we do but go to the beach??  Of course, I had to go in the water,which was..shall we say, ‘chilly’?  The beach was clean. The washroom was not. Definately a “D” minus minus. Do not approach!

Lastly before we headed back for a pork steak BBQ we stopped at the tiny wharf on Wharf Road.

Day 3 on the Cabot Trail

This was the day we were heading home. It rained cats and dogs the whole way,in fact, we were up and over Cape Smokey before we even knew it.
Our final stop on the Cabot Trail was a tiny cafe called the Clucking Hen where we grabbed some hot coffee and scrumptious cinnamon buns for the road.

What You Need to Know About the Cabot Trail

Construction.Construction everywhere. But the waits were fairly short and the traffic guys were friendly.

It’s busy. Don’t assume you will just waltz in and find a campground or accommodation. You might. And you might not. If it’s before mid October, book ahead,especially during the Celtic Colors Festival which runs October 6-14th in 2017.

Gas stations are few and far between from Cheticamp to Ingonish.In fact, the only one between is on the Cabot Trail near the turnoff to Dingwall.

We travelled clockwise along the Cabot Trail- I prefer the inside lane.

Plan for lots of photo stops and some hiking if you can. Although we took 3 days, we could have done it in much less time-it’s 300 km around the trail. But I would have liked to hike a few more trails. Stopped at St.Peter’s Church in Cheticamp. Maybe even dipped inland at Margaree to take in a  Three Fiddlers Concert.

And there will be one.